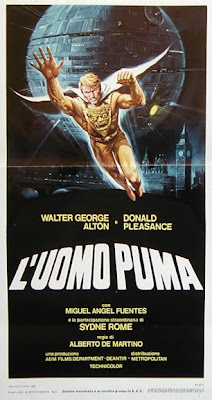 Plot: Kobras, an evil gentleman, has gotten his hands on a magical Aztec mask which he intends to use to control the world. An Aztec arrives to find somebody, specifically Pumaman, to stop Kobras. Well, it's either an Aztec or Jack Nicholson's buddy in One Flew over the Cuckoo's Nest. The Aztec locates Pumaman, paleontologist Tony Farms, and gives him a magic belt which gives him yellow pants, a black shirt with a picture of a mask on the front of it, and a red cape. Suddenly, he's got destructive claws, night vision, and the ability to fly, and he's all ready to put a stop to the evil Kobras's evil plan.

Well, Pumaman sort of flies. It's not exactly the best special effect I've ever seen. It's essentially the actor bent slightly at the waist and making a flailing motion with his hands in front of a blue screen. It's not good at all, but apparently the producers of The Pumaman thought the flying effects were their ticket to box office success because it seems that over half of this movie is scenes of the low-grade, no-budget superhero stumbling through the air. The costume's ludicrous. I'm pretty sure I could grab articles of clothing from my closet and drawers to put together a better costume than Pumaman's. Add dopey fist fights, a space ship thing that looks like a Pokemon ball, Stonehenge, fake heads, disco funk, and black leather outfits. Despite the low quality of the movie, there's still a lot of wisdom squeezed into the dialogue of The Pumaman, most provided by the Aztec. Before watching this, I didn't know that dinosaurs became extinct because they forgot how to love each other. Now I do. And I'll definitely take the "It's not how one sleeps but how one wakes that is important" proverb to heart. I don't know anything about Aztec religious beliefs, but I'm going to have to find a church to see if I can get my hands on one of those belts. Or an Aztec buddy! Pumaman!
Labels: 4, Italian, movies with "man" in the title, religion, superhero, violence